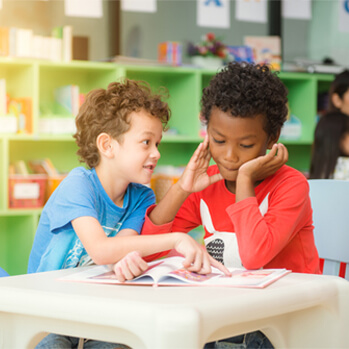 Life is a series of problems to be solved. We don’t mean this in a doom and gloom way, rather that our daily lives are a series of multiple small challenges which we automatically solve using our refined problem solving skills.

In fact, our ability to problem solve is so automatic that we don’t even think about it. Just today you’ve likely made a myriad of problem-solving decisions from what to wear, how to prepare for a meeting, to how to cajole your pre-schooler in to eating their five-a-day.

But here’s the thing: children don’t yet possess these same problem-solving abilities. They aren’t inbuilt. They have to be learned. This is particularly true for pre-schoolers.

If you’ve stood wide eyed and dismayed at the actions of a small child which seem completely at odds with sense, as we all have, you’ve witnessed their lack of problem-solving and critical thinking ability. This is natural, age-appropriate behaviour.

However, for a child to develop and thrive, to succeed at school and life, they need to develop the ability to problem solve and think critically. They need their ability to do this to become as automatic as yours.

We can’t stress this enough. The children who fly-high at school, and are the socially confident (not necessarily extrovert), are those who are ahead with their critical thinking development.

Having an ability to problem solve and think creatively enables a child to solve problems independently, and to increasingly complex degrees. They become more efficient in their overall development and abilities.

But this skill needs building. Stories are a hugely influential way of building these very skills.

How Do Stories Develop Critical Thinking?

Every single good story is about problem-solving. The characters have problems to solve and need to think critically – that is what makes an engaging story.

What’s more, story-telling is an immersive experience for children. They can taste the sugary sweetness of the gingerbread house in Hansel and Gretel. They can feel themselves puffing up to blow down houses in the Three Little Pigs.

This power of story-telling doesn’t simply entertain. It doesn’t only build vocabulary. It doesn’t even just ignite a passion for reading and learning. It actually develops the child’s ability to think critically too.

Take Avery Hill Education Programme for Early Years & Primary for example. Here three impish and lovable children delve in to a magical world where they are challenged with various conundrums. For example, they are short of supplies for baking birthday cakes, they face the problem of missing instructions for sewing an enchanted teddy, and they need to help their science teacher create spells.

Here are the problems. They are obvious and the three children in the stories tackle them with success. However, it’s not just engaging in the language learning activities which has power. It’s also not solely about the second-language they are teaching. It’s also the fact that these characters are relatable.

Relatable characters, even with a mythical setting, enable a child to ‘get lost’ in the story and learn through them. They pay attention, they follow how the characters are thinking, and learn to think critically – just like them.

This can further be extended when you support the animated stories for kids with additional storytelling and the scope for the child to use their experience from the story in a new and reinforcing way.

Avery Hill Education Programme for Early Years & Primary do this by conveying the stories themselves through interactive activities for kids. But they don’t stop there. Each story is also combined with role-play games. These enable children to both interpret and reflect on the stories as well as the situations and problems presented within them. It’s about asking the right questions in the right way to develop a child’s opinions and thought processes.

Children learn by both watching and experiencing. They are the world’s greatest mimics. What they see they will do. The same applies for problem solving. Give them the skills to solve their own problems and they transform in to an individual empowered to learn and thrive, rather than the child having the melt-down because they need the adult to step in and formulate a solution.

By learning about problem solving in a safe way, through storytelling, children get the opportunity to attempt resolutions on their own which gives them confidence in real-life situations. They can then build on these skills further as they grow. They won’t be daunted by new tasks but instead face them with an automatic knowledge that they can give it a go.

Avery Hill Education Programme for Early Years & Primary nurture this problem-solving development through stories, activities and role-play games. You can now subscribe to the Beginner Level of our programme here.

Book Your Free Assessment Today!Get Started
×
You must be logged in before using WishList. To login click here